Exhibitions and Events: Celebrating South Carolina Poetry: An Exhibition to Mark the Acquisition of the Ninety-Six Press Archive (2015) 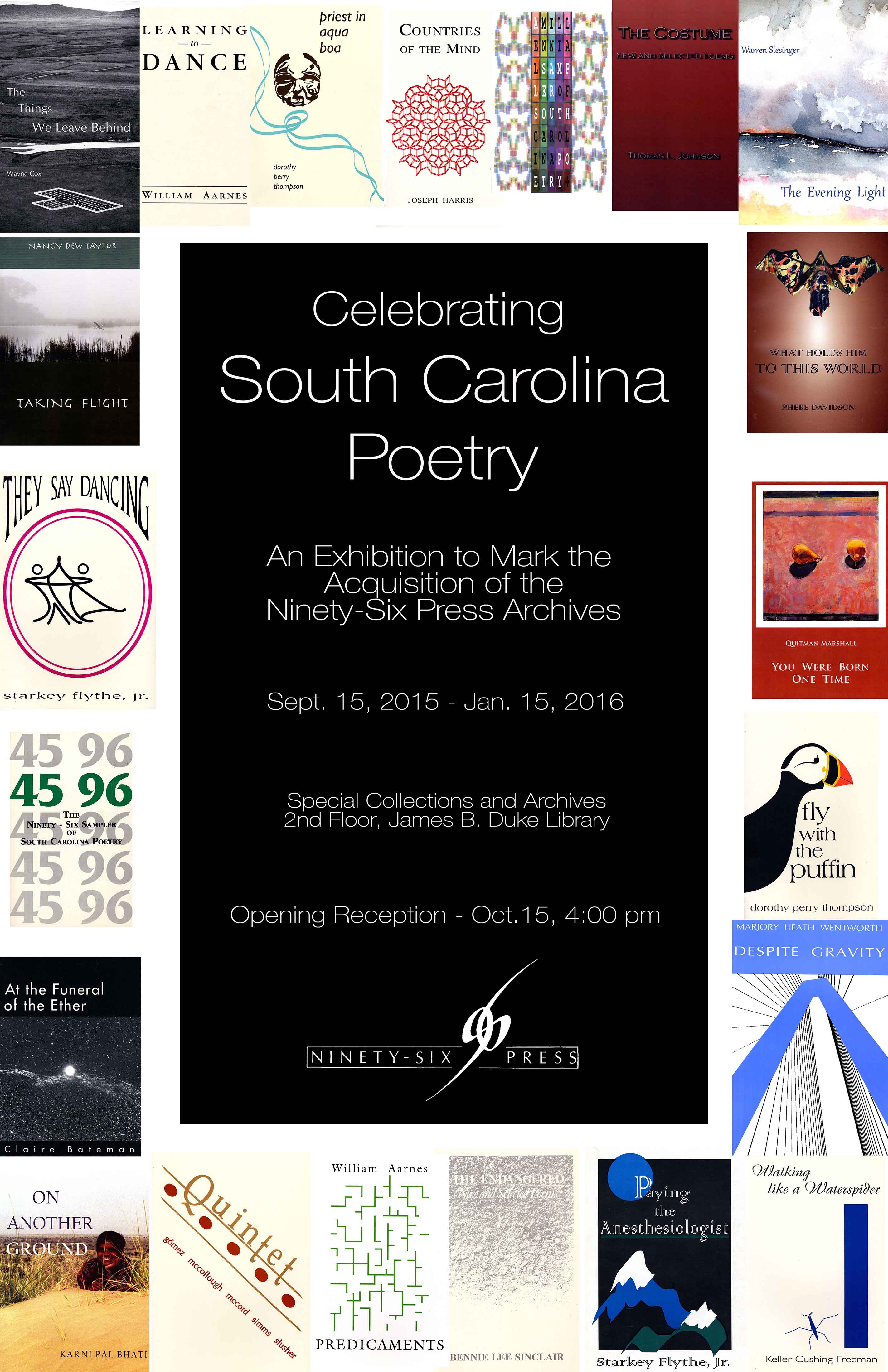 English professors William Rogers and Gilbert Allen founded The Ninety-Six Press at Furman University in 1991 to publish book-length works of poetry by South Carolina authors. Rogers and Allen operated the press jointly until Rogers’ retirement in 2010. Since then, Allen served as the editor and Rogers has continued to serve as book designer and typesetter.

In the Press’s 25-year history, it has published eighteen single-authored books from fifteen poets, one volume of poetry from five contributors (Quintet, 2003), and two major anthologies of South Carolina poetry. Before The Ninety-Six Press took up its mission, the last major anthology of South Carolina poetry was published in the 1930s. The Press has also published books from two of the poet laureates of South Carolina. Over the years, the Press has received financial support from the Metropolitan Arts Council of Greenville, the Emrys Foundation, and from Furman University, in addition to its founders’ seed money.

In the summer of 2015, Allen transferred the archives of The Ninety-Six Press, together with its stock of books and its financial accounts, to the Furman University Libraries, where it is part of the South Carolina Poetry Archives. The transfer agreement stipulates that the Libraries will “use the current and future assets of the Press for the benefit of South Carolina poetry and poets.”

This exhibition marks that transfer. Using the Press’s archives, it traces some of the work of Allen and Rogers – editorial, design, outreach, and fundraising – as well as that of the Press’s many authors. In remarks given at the Press’s 20th Anniversary Symposium in 2011, Gil Allen said the following:

In the spring of 1991, Bill Rogers and I had a conversation about the lack of book publishing opportunities for South Carolina poets….Bill recalls that I made the suggestion we start our own press, and I recall that he made the suggestion. In any event, we decided to contribute $1500 of our own money to the enterprise, to submit a grant proposal to Greenville’s Metropolitan Arts Council, and to start The Ninety-Six Press.

And what a remarkable publishing legacy it is.

Many thanks are due to Julia Cowart, Kathy Hamlin, Mark Frederick, and the Friends of the Furman University Libraries for assistance in making this exhibition possible.