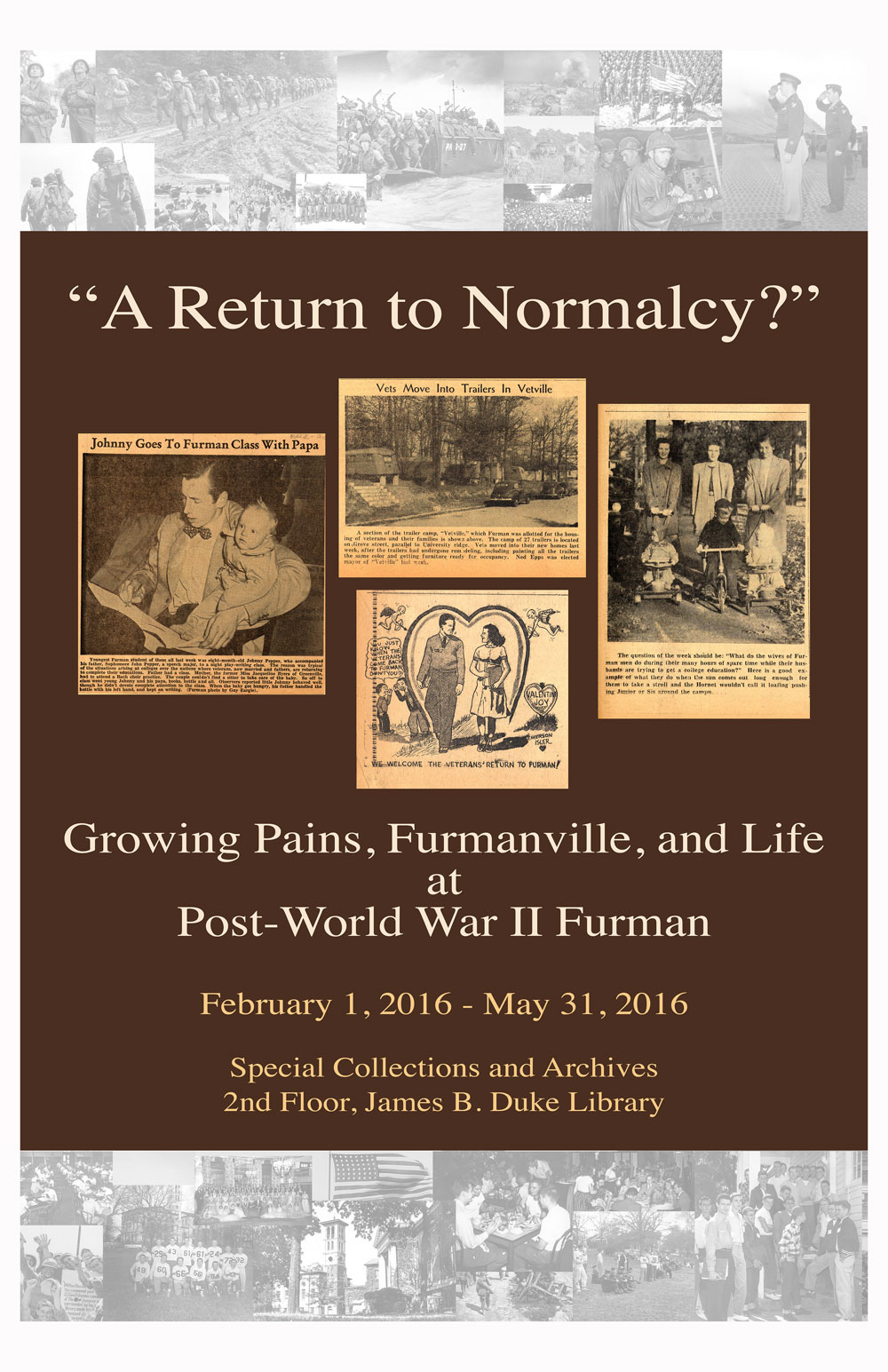 After the United States entered the war in 1941, American colleges and universities experienced a drastic decrease in student attendance. Male and female students alike left school and join the war effort. Those left on Furman’s campus found themselves in an environment that was drained of life. Social activities such as clubs and sports ceased. Once the soldiers returned home after so many long years, many thought that Furman would return to normalcy and life could begin anew.

The G.I. Bill, created in 1944, provided low interest mortgages for veterans to buy homes and tuition for veterans wanting to attend college. All across America, veterans took advantage of these new opportunities. Colleges everywhere, including Furman, began to experience a massive influx of students. Universities had to make rapid changes to accommodate these new challenges.

At Furman, the most immediate challenge was a lack of space. There were simply not enough dormitories to house returning students and newly-accepted veterans. To solve this problem, older barracks were purchased from the government and used to house incoming veterans. Though not perfect, it was meant as a temporary solution. For soldiers who came back to the States with wives and in some cases budding families, a trailer park, affectionately named “Vetville” and later “Furmanville,” was created on Graham Field at the edge of campus. Shortly after being established, Vetville was transformed into a comfortable neighborhood by its residents.

Other challenges included a shortage of faculty to educate Furman’s growing student body. Faculty members were as inclined to fight for their country as their students and could not immediately return to their classrooms. With faculty numbers already low, Furman struggled to find enough educators to teach all the needed classes. The final challenge to Furman was the condition of its campuses. Many buildings were beginning to show signs of disrepair, and returning students noticed. With so many students on campus, Furman’s Board of Trustees began planning to relocate and consolidate the male and female campuses. With money being raised to purchase this new land and to pay for much needed faculty, no extra expenses went towards the upkeep of the original campuses. Conflicts arose when students made their grievances known.

On campus, many people noticed a new spirit brought about by the returning soldiers. Grateful to put the war behind them, soldiers were noted to take their studies seriously. They enjoyed their new civilian lives and freedom, but their real focus remained on their studies. In addition to a serious attitude, veteran students brought back with them a newfound lust for life. After spending so many years face to face with the atrocities of war, veterans wanted to take time to enjoy all that they had been fighting for. Post-WWII Furman could not return to prewar ‘normalcy,’ but it did propel the university into the future.