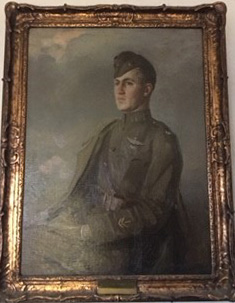 Donaldson spent his boyhood in Greenville, S.C., living with his aunt, Nannie Donaldson Furman, attending Greenville High School and then Furman University for his freshman year, 1915-1916. He entered the College of Civil Engineering (then called Sibley College) at Cornell University in 1916; entered the aviation ground school for summer 1917, was then commissioned as a Lieutenant in spring 1918, and assigned to active duty overseas.  Attached to the Royal Air Force, he was posted to 32 Squadron on 3 July 1918 and claimed seven Fokker D-7s in less than two months.

Donaldson was shot down and captured by the Germans on September 1, 1918, but escaped the next day. He was recaptured on September 9, escaped again three days later, reaching Holland the following month and then England only a few days before the end of the war. He and several other flyers were received by King George V at Windsor Castle. Although Donaldson had never actually flown with the U.S. Air Service while in combat, he was promoted to captain in the U.S. Army and was decorated with the British Distinguished Flying Cross, the U.S. Distinguished Service Cross, and the Belgian Croix de Guerre.

During the 1926 to 1930 period, he was president of Newark (New Jersey) Air Service, Incorporated. After winning two races at an American Legion air meet in Philadelphia, he was killed on September 7, 1930 when his plane crashed during a stunt-flying performance.

Donaldson was married to Harriet McCullough of Atlanta, Ga. in 1922. They had no children.