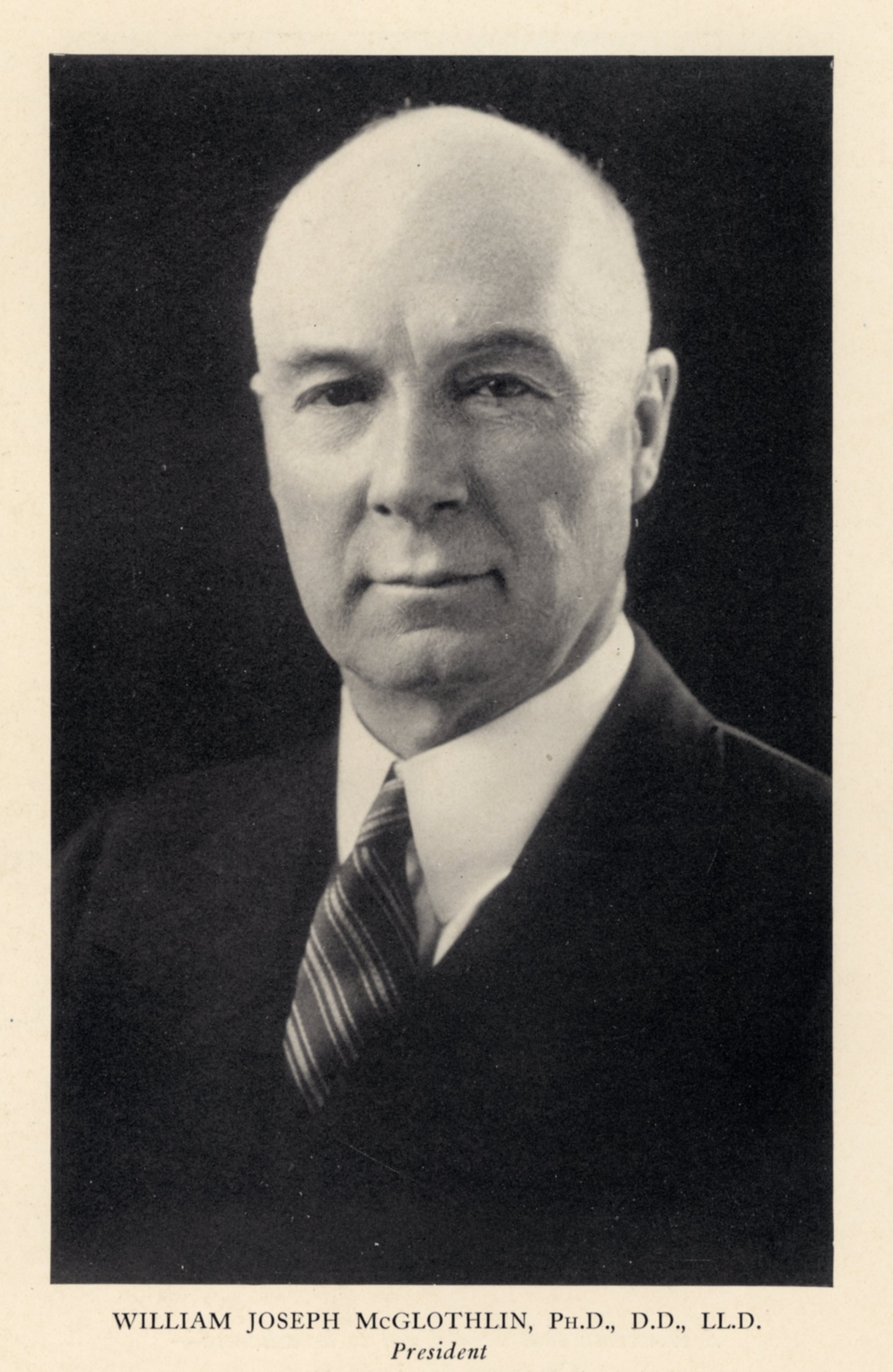 William J. McGlothlin was born on November 29, 1867 to William James Alexander McGlothlin and the former Elizabeth Ellen King near Gallatin, Tennessee. He attended Bethel College, Ky. (A.B., A.M., D.D.), Southern Baptist Theological Seminary, Ky.(Th. M.), and the University of Berlin(Ph.D). After graduating in 1889, he left to teach Math and English at the Bardstown Male and Female Institute in Kentucky. McGlothlin taught there for two years before leaving to answer a call for the ministry. He was ordained on September 24, 1891, and began taking classes at the Southern Baptist Theological Seminary in Louisville, Ky. the following week.

McGlothlin was selected to be the Assistant Instructor in Old Testament English and Hebrew in 1894, following his summer studying German at Amherst College. He was promoted again in 1896 to Assistant Professor of Old Testament Interpretation, and in 1897, the position of Professor of Biblical Introduction was added to his duties. McGlothlin had numerous other duties during his time at the Seminary, including Treasurer of the Seminary from 1890 to 1904. He was also quite busy academically, having earned his Ph.D. from the University of Berlin in 1902. McGlothlin received the Honorary degree of Doctor of Laws from Furman University in 1909.

McGlothlin became the President of Furman University as well as secretary of the Education Board of the Southern Baptist Convention in 1919. He came in with a vision to increase Furman’s size and to elevate its academic standards. His first major projects were to improve existing buildings and to purchase land around the existing campus to provide academic buildings and accommodations for more students. Furman began having higher admissions standards and started a very successful Summer School program that several other colleges emulated.

Along with the higher standards for incoming students, McGlothlin’s expectations for the faculty were just as high. All new faculty members were expected to have a doctorate, and he made sure that all professors taught in their discipline alone. He also brought to fruition an expanded curriculum, starting with a Law School in 1921, a goal of the University since 1851. Furman’s athletics and clubs increased in importance with the increase of the student body.

All of these improvements and expansions created financial stress on the institution. After many failed plans to alleviate debt, James B. Duke gave Furman University an endowment of about $2,000,000 in 1924 at the urging of Bennette E. Geer. Soon after receiving Duke’s gift, Furman became an accredited college. In 1930, McGlothlin accepted the position as President of the Southern Baptist Convention in addition to his duties as Furman’s President.

McGlothlin married May Belle Williams in 1897 and they had five children. She passed away June 20, 1926. McGlothlin then married Mary Louise (Breazeale) Bates [Mrs. Eugene Franklin Bates] in 1929. On May 16, 1933, McGlothlin and his second wife were in a car accident while on their way to the Southern Baptist Convention in Washington D.C. Mrs. McGlothlin was killed instantly, and Dr. McGlothlin died on May 28.