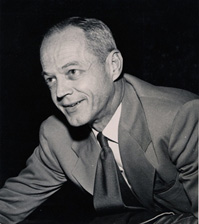 Jesse Lyles Alley was born on July 9, 1908 in Spartanburg, South Carolina. He spent the early years of his life on a dairy farm sharecropped by his father and uncles. After his grandfather was injured in a mule wagon accident, the family moved into town. For a time following their relocation, Alley helped to support his family by selling newspapers in the street. His childhood friend and future Furman University president, Dr. Gordon Blackwell was an instrumental factor in setting the foundation for Alley’s future career at Furman. As boys, the pair built a basketball goal and, guided by the “faint glow” of a “10-watt light bulb,” learned how to shoot baskets together. Upon Alley’s graduation from Spartanburg High School, the Blackwell family helped rally the community to gather the funds necessary for him to accept his athletic scholarship at Furman and attend the university.

Late summer night practices coupled with natural athletic ability led Alley to become a star college athlete. A testament to his athletic affinity, he graduated from Furman in 1933 as a four-year letterman in track, baseball, football, and basketball, earning twelve letters in total. Alley had a successful beginning to his post-graduate athletic career. He coached the Southern Bleachery basketball team in Taylors, South Carolina during the 1930s and the undefeated Miami Senior High School football team in 1942. He served in the Navy during World War II, and, after his return, accepted a position in Furman athletics. Over a 33 year career at his alma mater, Alley served as an assistant football coach, head basketball and baseball coach, a faculty member in the Physical Education Department, and the university’s athletic director. In total, he supervised twenty seasons of basketball, and Alley retired from coaching in 1966 as Furman’s most successful coach overseeing 245 victories.

In 1975, Alley officially ended his association with Furman University athletics when he stepped down from the position of athletic director. Although he was an athlete, coach, and administrator during his time at Furman, Alley’s legacy is arguably rooted in his contributions to the university’s basketball program. When Alley received the head coaching position for the team in 1945, athletic funds for the university were low. Players sometimes traveled to and from games “in cars belonging to Alley and his friends.” However, under Coach Alley’s leadership, the team “shot” to national prominence in the 1950s. He personally recruited Frank Selvy, Furman’s first All-American player who, in 1954, set a national collegiate record when he individually scored 100 points in single game against Newberry College. Another of Alley’s players, Darryll Floyd, soon joined in sharing the honor of designation as an All-American athlete and gained further positive attention for Furman’s athletics. In addition to the successes of individual players, Alley’s entire basketball program received widespread recognition as national scoring champions from 1953 to 1956 and his 1951-1952 team celebrated as the nation’s most improved.

After his retirement from Furman, Alley stayed busy working as an executive at a local box manufacturing company co-founded by his son. In 1984, Furman established an athletic scholarship in Coach Alley’s name. He received news of the honor at a surprise ceremony held at halftime during a Furman basketball game. His induction into the South Carolina Athletic Hall of Fame and the Furman Athletic Hall of Fame further celebrated Alley’s prestige as a coach and athlete. Lyles Alley passed away March 16, 1990 at the age of 81, bringing to an end a lifetime spent in connection with Furman and the Greenville community.